Born and raised in The Bronx, Ari Gold was discovered singing at his brothers bar-mitzva at the tender age of five. After winning first prize along with his two brothers at the First Annual Jewish Children’s song Festival, Ari landed his first job as a professional singer and actor playing the lead role in the CBS Children’s record Pot Belly Bear: Song and Stories. 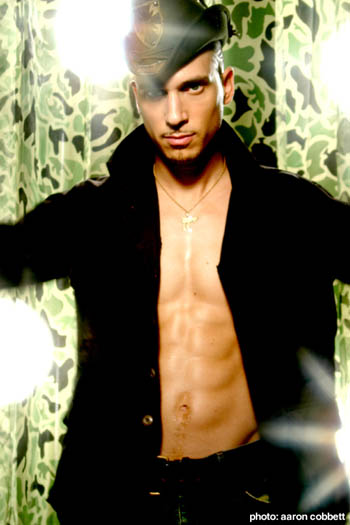 The album went platinum. This led to a successful career as a child vocalist singing on over 400 jingles, doing various animated voices for Cabbage Patch Kids and the cartoon Jem and back-up singing for the likes of Diana Ross. After graduating from Yeshiva high School in Manhattan, Ari went to study at Yale and received his bachelor of arts degree from New York University. Taking advantage of being in one of the most vibrant music scenes in the world Ari began performing his original music at NYC hotspots such as Joe’s Pub, Fez, China Club, Barracuda, Metronome, Flamingo East, Pyramid, Splash, Bar d’O, Starlight, and CBGB’s. All the while Ari was recording material which would make up the bulk of his debut CD released in 2001. The debut album anticipated pop music’s movement to a more R&B sound and included explicit lyrics of love songs sung to a man by another man – something the genre had practically never seen or heard of before. The album went on to take home the 2002 OUTMUSIC AWARDS FOR OUTSTANDING DEBUT RECORDING and in 2002 Ari was later named one of GENRE MAGAZINE’S MEN WE LOVE.nre Magazine’s “Men We Love”.

The debut album garnered the attention of legendary tunesmith Desmond Child (Ricky Martin, Cher, Aerosmith, Kelly Clarkson, Clay Aiken, etc.) and their first collaboration “I’m All About You,” (Island Universal) debuted in the top 20 on the UK pop charts and became a top 10 dance hit. Co-written and produced with UK garage sensations DJ LUCK AND MC NEAT the song brought together the sounds of R&B, Pop and two-step — an underground genre that was breaking in the UK. The video, shot in Miami, was heavily played and requested on MTV and The Box. In conjunction with the single Ari performed with Luck and Neat on practically every major TV and radio show in the UK including, Live And Kicking (CH. 5), T4 (CH.4), RADIO ONE BIG SUNDAY and the legendary TOP OF THE POPS (BBC).

In January of 2004, Ari released his sophomore album titled SPACE UNDER SUN on his own label Gold18 Records. The album debuted at #1 on the OUTVOICE CHARTS, received critical praise and instantly landed Ari on the cover of countless gay magazines around the world solidifying Ari’s status as an emerging gay icon. THE ADVOCATE raved that, “Gold performs with equal parts of sly, finger-snappin’ sass and earthy R&B finesse,” and remarked on how “Gold has assembled an impressive posse of collaborators…to frame his voice with the crisp yet fleshy sound of a platinum-selling recording” which includes Desmond Child, Major (Lamya, B2K), Kahlil (Res), KENDRA ROSS (Talib Kweli), Peter Amato (LeAnn Rimes), Steve Skinner (Taylor Dayne), and MARSHA MALAMET (Luther Vandross, Jessica Simpson). Metro Source Magazine named Ari “One Of The 25 People That Make Us Proud” along with Ellen Degeneres, Harvey Fierstein, Hugh Jackman and Barbra Streisand. The CD is enhanced with lyrics, a bonus mp3 and the music video of “Wave Of You” which has been playing on Rock America and For Promo Only with videos by Britney Spears, Justin Timberlake, Seal and Madonna in clubs across the country and featured on VH-1’s Totally Gayer and on HBO Zone. 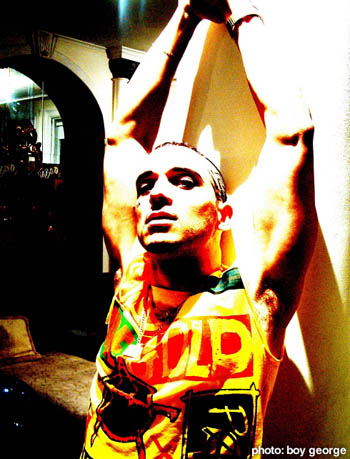 Ari’s unique look and style have gotten him into top fashion magazines such as W, he was named one of the 9 hottest men in NYC by H/X magazine, and was chosen as one of “the Stylistics” for VIBE magazine’s January 2002 issue shot by photographer Walter Chin. After being interviewed and photographed by pop icon BOY GEORGE for AXM magazine, Ari was chosen to be the spokesmodel for Boy George’s clothing line RUDE. Ari Gold’s populaR ONLINE FAN STORE includes a 12 Month Calendar featuring photos taken by many top photographers and a cover designed by acclaimed illustrator JOE PHILLIPS. The calendar has since been featured in Heeb Magazine under: Jewgayica. Other popular items include the “He’s On My Team” hoodie, T-shirts and mugs.
Ari has lent his songwriting and production skills to other artists and projects. In 2003 Grammy award winning producer David Morales remixed “I’ll Be Here” on his label Definity Records which Ari co-wrote with Automagic for Nashom of THE ONES (“Flawless”) solo project. The song went on to become a top 10 Billboard dance hit and was featured in an episode of Queer As Folk. Ari has also written for #1 Billboard dance recording artist KEVIN AVIANCE (“Give It Up”) both for his debut CD as well as for his latest release Entity. Ari keeps company with Diane Warren and Stephen Bray on 80’s teenscream Tommy Page’s last album as well. Ari’s music has been licensed to numerous independent films, including the cult hit Latin Boys Go To Hell, where he served as Music Supervisor and appeared in the film performing his song “See Through Me.”

Ari has been at the forefront of the contemporary gay rights movement donating his music to human rights causes. His song “Home” can be heard on the Human Rights Campaign’s benefit album LOVE ROCKS along with music by Melissa Etheridge, Christina Aguilera, Pink, Dolly Parton, Carole King, Cyndi Lauper, Oleta Adams & Billy Porter. Ari also donated his song “Bashert (Meant To Be)” with artists like RUPAUL and Adam Joseph to the American Civil Liberties Union’s (ACLU) benefit CD MARRY ME in efforts to secure the rights of same sex couples. Ari’s charity package, which can be purchased through his website, donates the proceeds to The Hetrick Martin Institute and The Black AIDS institute. Ari was also featured on the groundbreaking high rated VH1 special, MY COOLEST YEARS IN THE CLOSET.”My Coolest Years: In The Closet.” 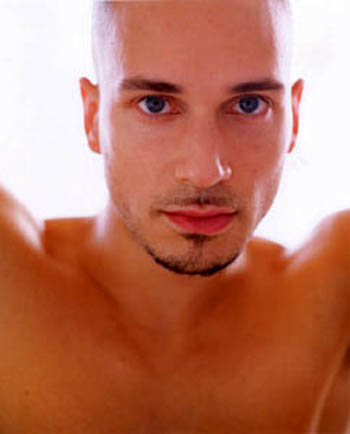 In addition to his sold-out concerts in NYC, Ari is touring the world in support of his latest album Space Under Sun headlining pride festivals in Boston, New York, Cleveland (opening for RuPaul), DC, Allentown PA, Ottawa, San Francisco (opening for Chaka Khan). and performing overseas in Prague, Israel, Milan, Ibiza, Scotland and the UK.