France know they must make good start against Finns

STOCKHOLM (Reuters) – New France football coach Didier Deschamps will be thrown in at the deep end when his side open their World Cup qualifying campaign with a tricky game in Finland on Friday. 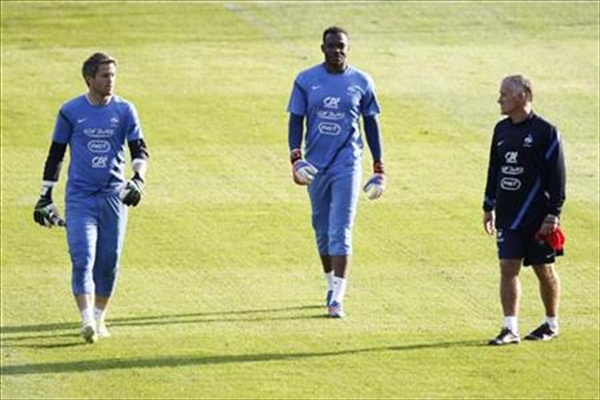 Drawn in Group I with a Spain side who comfortably beat them in the quarter-finals of Euro 2012, France have no room for slip-ups against Finland, Belarus or Georgia.

“Our goal is very clear: we want to qualify for the World Cup and the game in Finland is the first step. We have to focus on Finland only,” Deschamps told reporters.

“We want to qualify. We want to top the group but it is no use talking about Spain. First, we have to pass the two first tests,” he added, referring to the ties in Finland and against Belarus on Tuesday at the Stade de France.

“We want to have six points after the Belarus game. In a five-team group, you can’t afford to lose points on your way. Now we focus on taking three in Finland.”

Though they are overwhelming favourites to win in Helsinki, the French will have to overcome a Finnish side capable of playing some very tidy football.

In a group featuring Netherlands, Sweden and Hungary, the Finns collected a respectable 10 points in their Euro 2012 qualifying campaign and, a 5-0 thrashing by Sweden aside, they stood up well against their more illustrious opponents.

“This team does not play defensively at all. They are not just waiting for you at the back, they are able to create, to really play,” Deschamps said.

“It’s a good team with experienced players, most of them not playing in the Finnish league.”

Finland’s fleet-footed playmaker Alexei Eremenko said his side had nothing to fear from the French.

“For the players, it’s a good opportunity. We showed a few years ago against Germany that we are able to play against the top teams,” Eremenko told a news conference on Wednesday.

“We have good guys that can cause problems for France. If the game remains tight and we hit them on the counter-attack, we have the potential.”

Deschamps could revamp his back four to add experience in the starting line-up with Laurent Koscielny and Adil Rami likely to replace Mamadou Sakho and Mapou Yanga-Mbiwa, who were paired together in the August friendly against Uruguay.

Down the line, Deschamps will also have to deal with uncertainty following goalkeeper and captain Hugo Lloris’s move to Premier League side Tottenham Hotspur.

Spurs coach Andreas Villas Boas has said the France keeper is not guaranteed a starting spot ahead of 41-year-old American Brad Friedel.

“I have no problem at the moment. He’s not the number two (at Spurs) since he was not eligible to play last weekend. If he becomes a substitute, then we’ll see,” Deschamps said. (Additional reporting by Gregory Blachier in Paris; Editing by Clare Fallon)